Why Hire David Pham As Your Personal Trainer 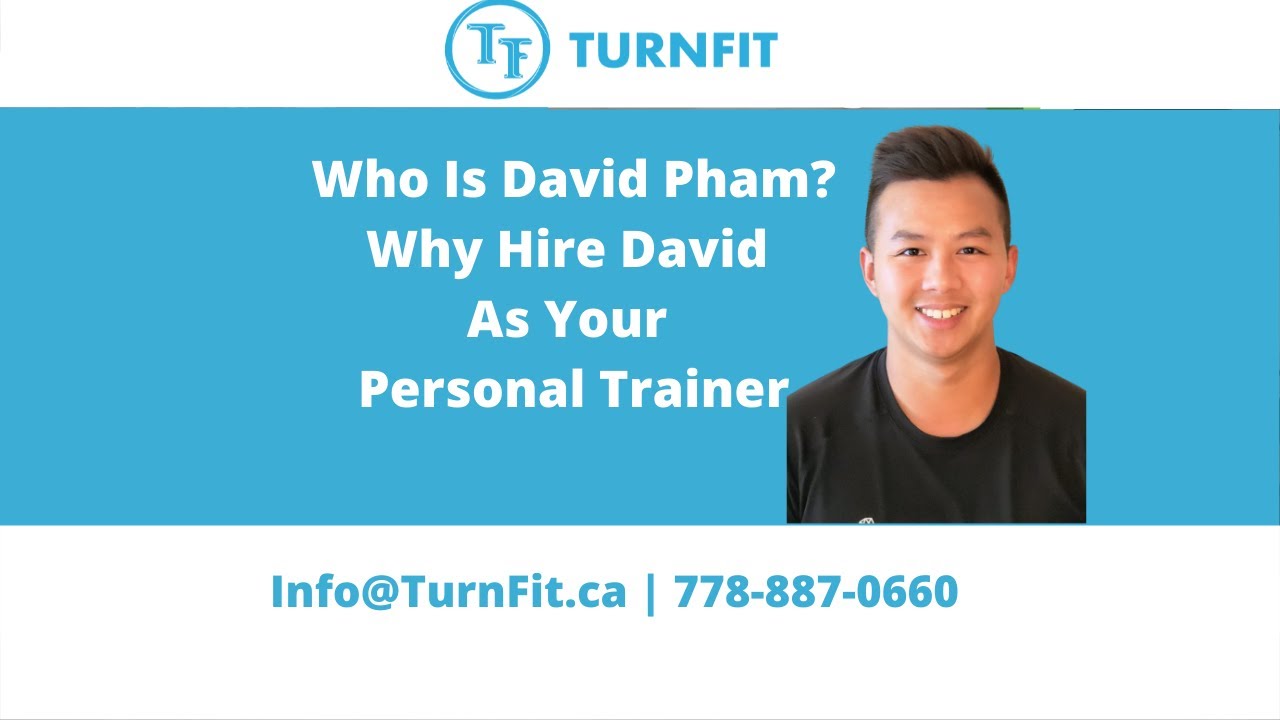 David Pham 0:06
I wanted to become a personal trainer because I really enjoy fitness in general, I find that being active and moving is crucial to health, mental health, especially just like everyday enjoyment of life. And also like, being able to teach others like how to move is pretty important in preventing injuries.

David Pham 0:48
The moving optimally is important because as I grew up, I was in a lot of sports, and I often found myself injured, whether something’s like improper mechanics or just overuse, overuse with improper mechanics led to a breakdown of my body. I was injured for two years because of that reason. And which really put me in a bad place. Just because I couldn’t do the sport that I loved because of that overuse injury. And having to relearn mechanics, relearn proper form led me to be able to play my sport again. And I find that preventing that from the beginning is much easier than trying to recover from the injury.

David Turnbull 1:41
Any people at the beginning don’t have the knowledge on how to move optimally, in a way that it won’t get them injured. So how did getting injured impact you mentally, as I

David Pham 1:53
was saying, Before, volleyball or sports was a big part of my life growing up. And it was a big part of my identity I found and not being able to play the sport that I loved. Kind of really sucked, because it was also my outlet for stress, anger. And it brought me a lot of joy. So not being able to do that really impacted me and I found that I didn’t have an outlet anymore.

David Turnbull 2:24
That makes sense. And I imagine that might be a big driver into why you want to also become a physiotherapist, is that one of the reasons to like really help those athletes help those everyday people that when they are injured, you can progress them and show them how to move healthy as quick as possible.

David Pham 2:48
It is actually a reason for becoming a physiotherapist is to help people who have been in my situation who have been injured, whether it’s from like a car accident or overuse injury, like sports or from lifting it properly, to be able to get them back on their feet to a point where they can do what they want to do that they love. As quick as possible.

David Pham 3:36
I have seen a few clients from when they first came in to how in pain they were unable to move in a certain range of motion to maybe three weeks later. And they found an increase in their range of motion, a pain free range of motion where they felt a lot happier. They’re super excited with how much progress they’ve made in such a short amount of time.

David Turnbull 4:03
Nice. And then what would you say an asset is from working with someone like turn fit and baseline knowledge wise for the average person that’s trying to hire a trainer.

David Pham 4:15
For the average person, I find that movement isn’t very natural. A lot of what I find as an athlete. The muscle cues is picked up really quickly. But with the average person who doesn’t move often, it’s a bit harder just to like signal the small cues but because working as a rehab specialist at baseline, you learned to work with average people who don’t move as much. Spend more time working in the office or aren’t active at all.

David Turnbull 5:00
Nice. And so with all your knowledge that you collected over the years, do you have any tips or tricks or advice for, let’s say, the average person that just wants to become a better version of themselves?

David Pham 5:17
Go for a walk daily. That will be my advice. It’s probably the biggest thing just to get your body moving. And the easiest and impact low impact way of

David Turnbull 5:30
exercise. X. Yeah, I definitely agree walking is very underestimated. Walking can be very meditative, and we just need to move more. And I’m sure you have, once you meet somebody, you can even improve their walking greatly so that all the muscles fire the way they should walk, or move when they’re walking. You mentioned sports. What is your sports background? And What sports did you play?

David Pham 5:58
Throughout high school, I played a lot of basketball, I played Ultimate Frisbee, badminton. But towards the later half of my high school career, I switched over to volleyball and I grew to love the sport. Mainly started because my friends played. And because they all played, I want to hang out with them. And I start playing by myself and free 12 year was when it really clicked for me, because we were so close to making provincials. And we were, we had lost. But at that point, it’s like, I didn’t want it to end. So I continued the sport at a club level, post high school, I kept on playing. And till this day, I am still playing fairly often.

David Turnbull 6:45
Thanks. That’s awesome. And then, for everybody wondering like, Who is David? Like, can you elaborate more on who David is a little bit of your background and how you got to who you are today.

David Pham 6:57
David has always been a very active child growing up, even for as long as he can remember, he’s always been playing something running around outside, playing at the park, super active, never wanted to still grow, which led him into sports and growing up with such a love for sports. There was never a moment where he wasn’t active. But because of that, it led to a lot of injuries, a lot of improper mechanics because he didn’t know any better. Because of those injuries, and led him to a career in kinesiology, where he wants to learn more about the human body and eventually becoming a physio as an end goal. Just super Brandon, for other people to help other people with similar injuries as himself or myself, or just injury prevention. Like myself being in a position where like, I didn’t have an outlet for my stress, my anger and just like all the negative feelings that had pent up because I wasn’t able to play volleyball, I am able to understand where different people come from because pain isn’t something that is very visible. And it’s more so internal battle where people can’t see it, but you yourself, feel it. And just having that compassion and the understanding where not everyone is the same in terms of their struggles. Makes it easier for me to relate to.

David Turnbull 8:43
To learn more about how we can help you best book in your free video assessment call with us.

What are your goals? We would love to hear from you:

About
Testimonials
Why Us
See Proof
David's Story
Get Directions
Book Now!

Apply For A Free Assessment  $175 value

Apply For A Free Assessment Now >

APPLY FOR A FREE ASSESSMENT NOW >